You are using an outdated browser. Please upgrade your browser to improve your experience and security.
Julius Caesar
Roman ruler
Media
Print
Please select which sections you would like to print:
Thank you for your feedback

Our editors will review what you’ve submitted and determine whether to revise the article.

Julius Caesar, in full Gaius Julius Caesar, (born July 12/13, 100? bce, Rome [Italy]—died March 15, 44 bce, Rome), celebrated Roman general and statesman, the conqueror of Gaul (58–50 bce), victor in the civil war of 49–45 bce, and dictator (46–44 bce), who was launching a series of political and social reforms when he was assassinated by a group of nobles in the Senate House on the Ides of March.

Julius Caesar's family was old Roman nobility, but they were not rich. His father died when he was 16, but he received significant support from his mother.

How did Julius Caesar change the world?

Julius Caesar was a political and military genius who overthrew Rome’s decaying political order and replaced it with a dictatorship. He triumphed in the Roman Civil War but was assassinated by those who believed that he was becoming too powerful.

How did Julius Caesar die?

Julius Caesar was murdered in the Roman Senate House by a group of nobles on March 15, 44 BCE. The assassination plot was led by Gaius Cassius Longinus and Marcus Junius Brutus.

How did Julius Caesar come to power?

Julius Caesar crafted an alliance with Marcus Licinius Crassus and Pompey to form the First Triumvirate and challenge the power of the Roman Senate. After Crassus's death, Caesar led his army into Italy, defeated Pompey, and claimed the title of dictator.

Caesar changed the course of the history of the Greco-Roman world decisively and irreversibly. The Greco-Roman society has been extinct for so long that most of the names of its great men mean little to the average, educated modern person. But Caesar’s name, like Alexander’s, is still on people’s lips throughout the Christian and Islamic worlds. Even people who know nothing of Caesar as a historic personality are familiar with his family name as a title signifying a ruler who is in some sense uniquely supreme or paramount—the meaning of Kaiser in German, tsar in the Slavonic languages, and qay?ar in the languages of the Islamic world.

Caesar’s gens (clan) name, Julius (Iulius), is also familiar in the Christian world, for in Caesar’s lifetime the Roman month Quintilis, in which he was born, was renamed “July” in his honour. This name has survived, as has Caesar’s reform of the calendar. The old Roman calendar was inaccurate and manipulated for political purposes. Caesar’s calendar, the Julian calendar, is still partially in force in the Eastern Orthodox Christian countries, and the Gregorian calendar, now in use in the West, is the Julian, slightly corrected by Pope Gregory XIII.

Caesar’s gens, the Julii, were patricians—i.e., members of Rome’s original aristocracy, which had coalesced in the 4th century bce with a number of leading plebeian (commoner) families to form the nobility that had been the governing class in Rome since then. By Caesar’s time, the number of surviving patrician gentes was small; and in the gens Julia the Caesares seem to have been the only surviving family. Though some of the most powerful noble families were patrician, patrician blood was no longer a political advantage; it was actually a handicap, since a patrician was debarred from holding the paraconstitutional but powerful office of tribune of the plebs. The Julii Caesares traced their lineage back to the goddess Venus, but the family was not snobbish or conservative-minded. It was also not rich or influential or even distinguished.

A Roman noble won distinction for himself and his family by securing election to a series of public offices, which culminated in the consulship, with the censorship possibly to follow. This was a difficult task for even the ablest and most gifted noble unless he was backed by substantial family wealth and influence. Rome’s victory over Carthage in the Second Punic War (218–201 bce) had made Rome the paramount power in the Mediterranean basin; an influential Roman noble family’s clients (that is, protégés who, in return, gave their patrons their political support) might include kings and even whole nations, besides numerous private individuals. The requirements and the costs of a Roman political career in Caesar’s day were high, and the competition was severe; but the potential profits were of enormous magnitude. One of the perquisites of the praetorship and the consulship was the government of a province, which gave ample opportunity for plunder. The whole Mediterranean world was, in fact, at the mercy of the Roman nobility and of a new class of Roman businessmen, the equites (“knights”), which had grown rich on military contracts and on tax farming.

Military manpower was supplied by the Roman peasantry. This class had been partly dispossessed by an economic revolution following on the devastation caused by the Second Punic War. The Roman governing class had consequently come to be hated and discredited at home and abroad. From 133 bce onward there had been a series of alternate revolutionary and counter-revolutionary paroxysms. It was evident that the misgovernment of the Roman state and the Greco-Roman world by the Roman nobility could not continue indefinitely and it was fairly clear that the most probable alternative was some form of military dictatorship backed by dispossessed Italian peasants who had turned to long-term military service.

The traditional competition among members of the Roman nobility for office and the spoils of office was thus threatening to turn into a desperate race for seizing autocratic power. The Julii Caesares did not seem to be in the running. It was true that Sextus Caesar, who was perhaps the dictator’s uncle, had been one of the consuls for 91 bce; and Lucius Caesar, one of the consuls for 90 bce, was a distant cousin, whose son and namesake was consul for 64 bce. In 90 bce, Rome’s Italian allies had seceded from Rome because of the Roman government’s obstinate refusal to grant them Roman citizenship, and, as consul, Lucius Caesar had introduced emergency legislation for granting citizenship to the citizens of all Italian ally states that had not taken up arms or that had returned to their allegiance.

Whoever had been consul in this critical year would have had to initiate such legislation, whatever his personal political predilections. There is evidence, however, that the Julii Caesares, though patricians, had already committed themselves to the antinobility party. An aunt of the future dictator had married Gaius Marius, a self-made man (novus homo) who had forced his way up to the summit by his military ability and had made the momentous innovation of recruiting his armies from the dispossessed peasants.

The date of Caesar the dictator’s birth has long been disputed. The day was July 12 or 13; the traditional (and perhaps most probable) year is 100 bce; but if this date is correct, Caesar must have held each of his offices two years in advance of the legal minimum age. His father, Gaius Caesar, died when Caesar was but 16; his mother, Aurelia, was a notable woman, and it seems certain that he owed much to her.

In spite of the inadequacy of his resources, Caesar seems to have chosen a political career as a matter of course. From the beginning, he probably privately aimed at winning office, not just for the sake of the honours but in order to achieve the power to put the misgoverned Roman state and Greco-Roman world into better order in accordance with ideas of his own. It is improbable that Caesar deliberately sought monarchical power until after he had crossed the Rubicon in 49 bce, though sufficient power to impose his will, as he was determined to do, proved to mean monarchical power.

In 84 bce Caesar committed himself publicly to the radical side by marrying Cornelia, a daughter of Lucius Cornelius Cinna, a noble who was Marius’s associate in revolution. In 83 bce Lucius Cornelius Sulla returned to Italy from the East and led the successful counter-revolution of 83–82 bce; Sulla then ordered Caesar to divorce Cornelia. Caesar refused and came close to losing not only his property (such as it was) but his life as well. He found it advisable to remove himself from Italy and to do military service, first in the province of Asia and then in Cilicia.

In 78 bce, after Sulla’s death, he returned to Rome and started on his political career in the conventional way, by acting as a prosecuting advocate—of course, in his case, against prominent Sullan counter-revolutionaries. His first target, Gnaeus Cornelius Dolabella, was defended by Quintus Hortensius, the leading advocate of the day, and was acquitted by the extortion-court jury, composed exclusively of senators.

Caesar then went to Rhodes to study oratory under a famous professor, Molon. En route he was captured by pirates (one of the symptoms of the anarchy into which the Roman nobility had allowed the Mediterranean world to fall). Caesar raised his ransom, raised a naval force, captured his captors, and had them crucified—all this as a private individual holding no public office. In 74 bce, when Mithradates VI Eupator, king of Pontus, renewed war on the Romans, Caesar raised a private army to combat him.

In his absence from Rome, Caesar was made a member of the politico-ecclesiastical college of pontifices; and on his return he gained one of the elective military tribuneships. Caesar now worked to undo the Sullan constitution in cooperation with Pompey (Gnaeus Pompeius), who had started his career as a lieutenant of Sulla but had changed sides since Sulla’s death. In 69 or 68 bce Caesar was elected quaestor (the first rung on the Roman political ladder). In the same year his wife, Cornelia, and his aunt Julia, Marius’s widow, died. In public funeral orations in their honour, Caesar found opportunities for praising Cinna and Marius. Caesar afterward married Pompeia, a distant relative of Pompey. Caesar served his quaestorship in the province of Farther Spain (modern Andalusia and Portugal).

Caesar was elected one of the curule aediles for 65 bce, and he celebrated his tenure of this office by unusually lavish expenditure with borrowed money. He was elected pontifex maximus in 63 bce by a political dodge. By now he had become a controversial political figure. After the suppression of Catiline’s conspiracy in 63 bce, Caesar, as well as the millionaire Marcus Licinius Crassus, was accused of complicity. It seems unlikely that either of them had committed himself to Catiline; but Caesar proposed in the Senate a more merciful alternative to the death penalty, which the consul Cicero was asking for the arrested conspirators. In the uproar in the Senate, Caesar’s motion was defeated.

Caesar was elected a praetor for 62 bce. Toward the end of the year of his praetorship, a scandal was caused by Publius Clodius in Caesar’s house at the celebration there of the rites, for women only, of Bona Dea (a Roman deity of fruitfulness, both in the Earth and in women). Caesar consequently divorced Pompeia. He obtained the governorship of Farther Spain for 61–60 bce. His creditors did not let him leave Rome until Crassus had gone bail for a quarter of his debts; but a military expedition beyond the northwest frontier of his province enabled Caesar to win loot for himself as well as for his soldiers, with a balance left over for the treasury. This partial financial recovery enabled him, after his return to Rome in 60 bce, to stand for the consulship for 59 bce. 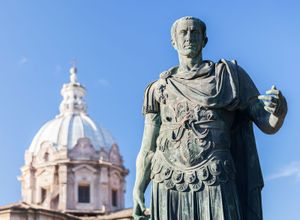